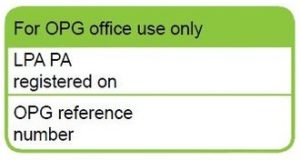 A refund scheme for those who have been overcharged for their power of attorney registration fees has recently been launched.

In an announcement made by the Ministry of Justice (MoJ). The refunds are being offered to those who may have been charged more than was necessary when they applied to register for powers of attorney between the 1st of April 2013 and the 31st of March 2017.

According to the MoJ, the process to register for enduring powers of attorney became more efficient during this period and as a result, operating costs for the Office of the Public Guardian came down. However, the fee charged for the application did not reduce in line with this.

The Power of Attorney registration fee was subsequently lowered by the ministry of justice. And the change came into effect on the 1st of April 2017.

The Office of Public Guardian (OPG) has since announced that the Ministry of Justice (MOJ) has agreed to refund the excess, and has now launched a refund scheme for those who have paid a higher fee in the qualifying period that is now felt necessary the MOJ.

Who Is Eligible For The Refund?

The refunds are being offered to those who registered an LPA or EPA between the 1st of April 2013 and the 31st of March 2017 who may have been charged more by the OPG than was necessary to apply to register.

During this period, the OPG’s operating costs came down as more people applied for a Power of Attorney and the process became more efficient, but the application fee charged was not reduced in line with this.

Who Can Claim The Refund?

A claim can be made by either:

• The ‘Donor’ – the person who made the Power of Attorney.
• An ‘Attorney’ – appointed by the Donor in an LPA or EPA.

The refund must be paid to the Donor, and only one claim is needed per Donor, even if more than one Power of Attorney was registered for example if an LPA For Property and Financial Affairs and LPA for Health and Welfare were registered at the same time.

How Much Is Payable?

The amount of refund payable will depend on the original date the application fees were paid. And whether or not the fees were paid in full or were paid at a reduced or remission rate.

If the full registration fee was paid at the time of application the following refund structure will apply:

If registration fees were paid at a reduced or remission rate than only half of the refund amount mentioned above will be refunded. An entitlement to receive 0.5% interest will also apply.

A claim can still be made if you are unsure of the exact date the application to register the Power of Attorney was made.

How To Make A Claim

It takes about 10 minutes to claim online via the gov.uk website. You will need to have your UK bank account number and sort code available to process the refund.

Claims can also be made by phone if you do not have a UK bank account. Or the donor has passed away or you have difficulty using a computer. To do this you will need to contact the Refunds Helpline who will help you to process your refund claim.

* Lines are open Monday, Tuesday, Thursday and Friday from 9 AM to 5 PM and Wednesday from 10 am to 5 pm. Please select option 6 if calling.

This website uses cookies to improve your experience while you navigate through the website. Out of these, the cookies that are categorized as necessary are stored on your browser as they are essential for the working of basic functionalities of the website. We also use third-party cookies that help us analyze and understand how you use this website. These cookies will be stored in your browser only with your consent. You also have the option to opt-out of these cookies. But opting out of some of these cookies may affect your browsing experience.
Necessary Always Enabled
Necessary cookies are absolutely essential for the website to function properly. This category only includes cookies that ensures basic functionalities and security features of the website. These cookies do not store any personal information.
Non-necessary
Any cookies that may not be particularly necessary for the website to function and is used specifically to collect user personal data via analytics, ads, other embedded contents are termed as non-necessary cookies. It is mandatory to procure user consent prior to running these cookies on your website.
SAVE & ACCEPT
Loading Comments...